Ah T-shirts, the frenemy of the home sewer who has learned to sew with woven fabrics. T-shirts pretend to be so easy, friendly, and achievable with their simple front and back and a couple of hems, but before you know it there's a wonky neckline or a band sitting out instead of flat, and your simple, smiley, fun T-shirt is showing off your incompetence.

Perhaps I could describe that better without anthropomorphising: T-shirts look so easy, but they are proving to be quite hard because I'm just not used to sewing with stretch fabrics. There, that's a little less emotional. However, I am not here to report my failures, which are many, but instead two small steps along the road to being a competent sewer of knits.

I made two T-shirts out of remnants picked up for $5 at a sale. That was tremendously satisfying in itself. Both were made using Kwik Sew pattern, which I have momentarily mislaid. For the first T-shirt, I substituted a neckband in the same fabric for the simple hem on the neckline shown in the pattern. Yes I know, it doesn't quite sit flat, but it's not too bad. 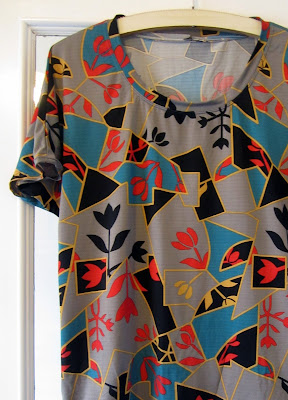 I also added a band at the bottom, which I really like when I'm wearing it. 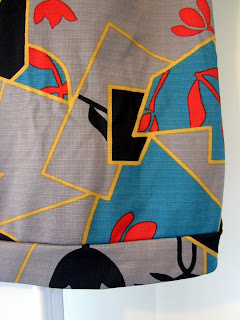 For the second T-shirt I used a pre-made stretch binding. I still need a bit of practice putting this kind of binding on, but I'm quite happy with this as a first attempt. It sits allllllllmost flat. 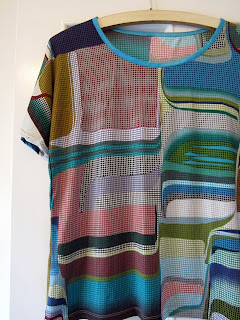 I twin-needled the bottom hem. Twin-needled it. With twin needles. See? 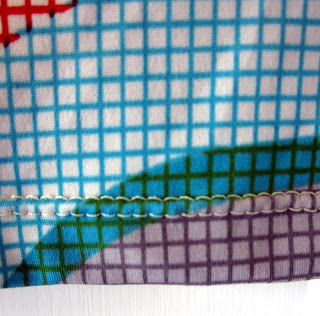 Now we are all friends, me and the two T-shirts. And we lived happily ever after.
Posted by Miss Smith at 1:15 PM 6 comments: Links to this post