It occurred to me the other day that I have now had almost a whole year with two children at school. I had deluded myself thinking that I would have lots of free time, but I quickly realized that a new phase brings with it substantial changes, in my case, doing more paid work. Not that I'm complaining, I really like my job, but it does cramp my style *craftwise*.
The upshot of this is that these days I'm a sucker for a quick craft activity that has the satisfaction of making something cool, and something homemade, just because it's fun. So...while I was standing at the stove cooking dinner last night, I made a candle. I had some beeswax lying around and a friend gave me some wick (bought by the metre from Livinglight Candles here in Nelson). An old can made a double boiler to melt the wax, an old cut-glass bowl (50 c at the junk shop) made the receptacle. I had googled making poured candles and saw all sorts of instructions re. sticking the wick in place and making sure the wick is the right size for the container. Well a job worth doing is worth doing badly, that's my motto, so I ignored all of that and just used what I had. I stuck the wick in the centre first with some hot wax, then held it in place between two skewers when I poured the hot wax in. Low tech. 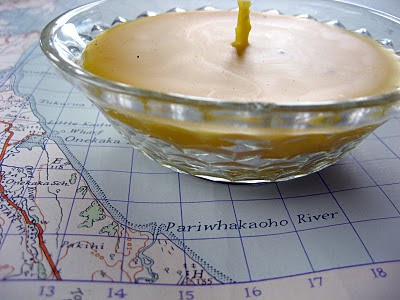 Actually I'm right into cut glass at the moment. It's something I see all the time in junk shops and I find it devilishly tempting when it's so pretty and so cheap. I keep bringing it home with me and stashing it away at the back of the china cabinet, but I know you would like to see it. 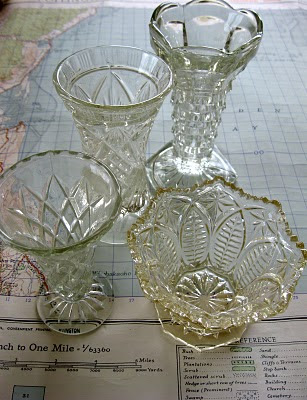