I was thinking aloud the other day, as I do, about things I'd like to make, and homemade deodorant was mentioned. I expected my husband to say something like "heh heh heh" because he often finds my propensity for all things homemade kind of amusing. However, he did not chuckle or chortle or tease me in any way whatsoever. In fact, he said, "I'd be right into that, because whatever stuff we buy makes my underarms itch and I end up scratching like a monkey all flippin day". Now that made me laugh ("heh heh heh heh heh") because it was a very amusing mental picture. And after I settled down, I went straight to work and made us some hippy-dippy-no-aluminium deodorant. Yes I did. 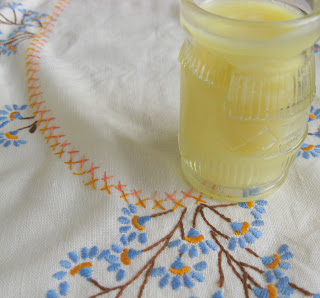 My recipe was based on this one here at Angry Chicken, but I will spell it out right here because I made mine according to what I had, so it ended up being a little different. I got the shea butter and cocoa butter from here, and I got the vegetable glycerine from the supermarket, next to the aspirin (strange but true).
Cocoa butter, 50 g
Shea butter, 50 g
Cornflour, 2 tablespoons
Baking soda, 3 tablespoons
Vegetable glycerine, 2 tablespoons
Essential oils as you please (I didn't put any in, and it smells like, well, nothing. Nothing is a good smell for a man or a woman, as far as I'm concerned.)
Melt the first two ingredients together (3 min in the microwave) then allow to cool a little. Add the cornflour and baking soda and mix well, then add the vegetable glycerin and mix again. Pour into small tins or jars. To use it, you get a little bit on your fingers and just smooth it on.
You know, the wee jar above is an old friend of this house; when we ripped out our bathroom and lifted the rotten floorboards it was there in the dirt underneath. It's one of my favourite little objects, because it was like finding buried treasure. Usually it has little flowers in it, but it's got a special guest-starring role as a deoderant jar for the time being.
Have a lovely long weekend everyone, over and out.
Update three days later: So far, so good. It lasts all day and no sweaty betty (thanks Emily Kate for the phrase). It did set quite hard, though, so next time I will consider using all shea butter (which is softer) instead of the cocoa butter.
Another update: If you plan to keep this for more than a month or two, then some vitamin E is a good idea as it acts as an antioxidant and stops the oils in the deoderant from going rancid. You just puncture a couple of capsules and add it in at the end.
Posted by Miss Smith at 7:00 PM 13 comments: Links to this post

Recently I've recieved some truly lovely and variously hilarious gifts from out of the blue. How lucky am I? Tell you what, I'm so lucky that if I fell in a sewer I'd be wearing a brown suit. 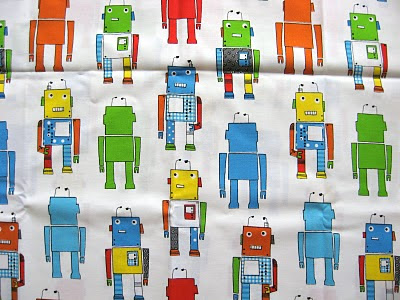 This robot fabric came all the way from Maine, USA. It was a thoughtful and unexpected gift from one of my favourite crafters, Iris. Thanks Iris! I will try to do it justice. By the way, did I ever mention that we were going to make Sylvie's middle name Iris, but when it came to filling in the birth certificate we forgot? True story. 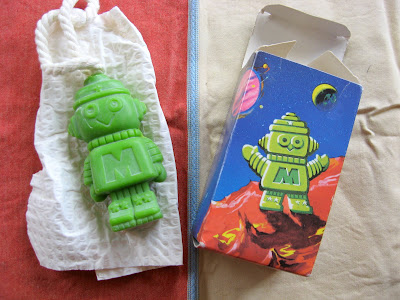 This little robot soap-on-a-rope was a gift from my sister, Marg. I love these wee treasures. It's too good to use of course. 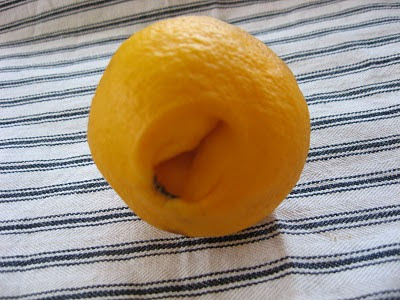 This rather amusingly anatomical lemon was a gift from a friend who knows how much I enjoy things with a rude twist. We have shown this lemon to many friends and visitors as a sort of personality test. I am pleased to say that all passed with flying colours by roaring with laughter. I hope you see the funny side. There's the funny side, right there, looking out at you.
Have a great week everyone!

Email ThisBlogThis!Share to TwitterShare to FacebookShare to Pinterest
Labels: presents

It's just as well I have lots of robots rolling around this house because otherwise how would I remember important events? This robot came in beeping the other day with a message on its screen: 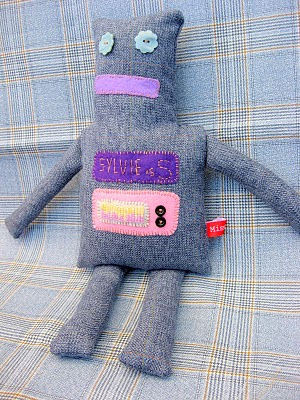 In case you can't read that here it is up close: 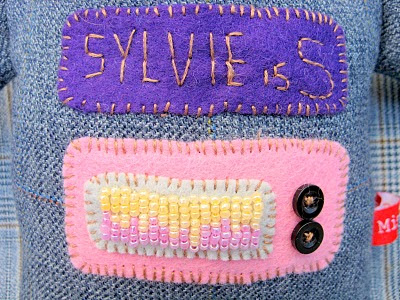 Actually, I hadn't forgotten that Sylvie is freshly 5, we had a wee party for her when we were down south (Doon Sooth) and she got some pressies and all that, but what with illness and holidays we haven't had a party for her Nelson friends yet.
Can I confess that I am simultaneously terrified and delighted by children's parties? I love planning the cake and the dinky little snacks and the games, but the actual execution is quite stressful. It's the shy person's lament, loving the idea of a party but being stressed out by all the people. And that's another mystery- how on earth can it be that I come from a family of 11 and yet I hate being in big groups of people? Sheesh. Don't ask me.
Anyway, Sylvie and I have planned a cute little party in a couple of weeks' time: The Gingerbread Man Butterfly Party. I am open to suggestions of games but there will be decorating of gingerbread people and a cake with butterflies on it. What else can you think of?

Posted by Miss Smith at 2:00 PM 7 comments: Links to this post

Every spring, the wee ones and I head off to my home town, Dunedin, for a wee holiday to take in the town and spend some time with family. I love Dunedin, it still feels like home and it's full of good memories. The train station is one of them, because we used to head off on our Stewart Island holidays from here when I was little. 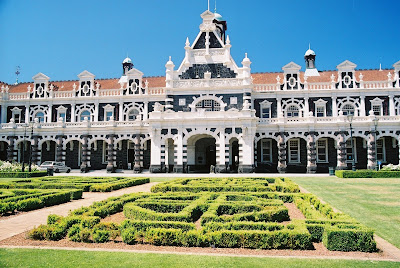 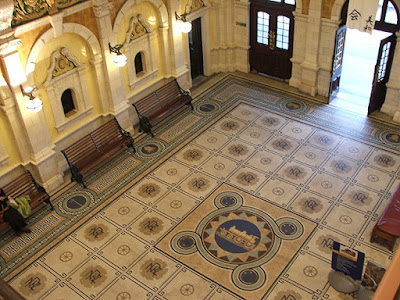 I remember my Mum waiting at these amazing ticket windows to buy our train tickets when I was just a little tot. All these ticket windows and the tiles are Royal Doulton don't you know? Dunedin does grand so well. I had great plans of taking my own children up to our next stop, Central Otago, on the train that goes from this station, but we spent all our holiday money on going to the movies, so we drove instead. I am pleased to say that we have a new memory of the train station, though, because we went to the Farmers Market there on Saturday morning, where I had a fabulous bacon buttie.
Next stop, Ranfurly, where the art deco buildings are so cute that they warrant a photo. 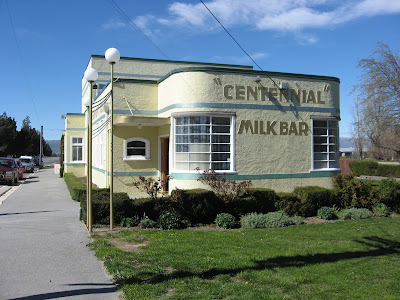 And if we're talking cute, how about this little car and garage on the way to St Bathans? 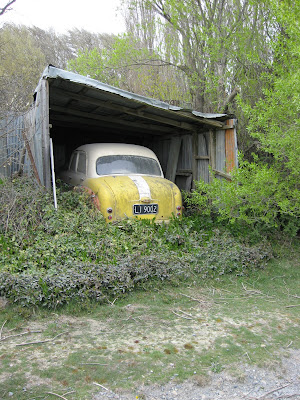 And the Vulcan Hotel in the St Bathans township, which is so iconic it's almost funny. 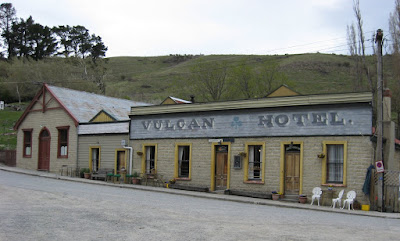 There aren't that many ruins in New Zealand, so if you find one, it deserves a photo: May I introduce the old school buildings in St Bathans. 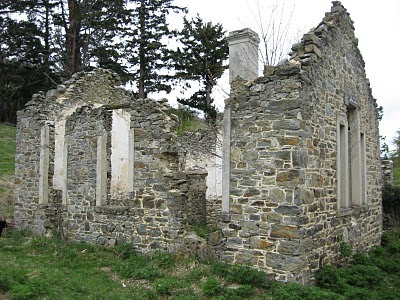 Do you ever find that your past comes back to haunt you at the oddest times? When we were little, my sister and I used to drive Mum mad with giggling inappropriately during the Catholic mass on Sunday. The more angry she got, the more hilarious it became. We egged eachother on and drove her to distraction. On the way home in the plane yesterday, my children were giggling away together about kicking the seat in front, which I'm sure you can believe is a very annoying thing to do. The more I told them off, the better the game became for them. They kicked it every time I turned away, and dissolved into uncontrollable giggles. I asked nicely, threatened severe consequences, tried a dozen different control measures, but nothing worked. I was so cross I felt like I'd explode. Life comes full circle.
Posted by Miss Smith at 11:29 AM 3 comments: Links to this post