I said to Harry I'd like to make him something for his 7th birthday, which is today. I was thinking he'd probably grown out of/got sick of my robots, so I was surprised and delighted when he asked for a nice new robot in green. Ah Harry, I love how you like my silly robots. You are your mother's son. 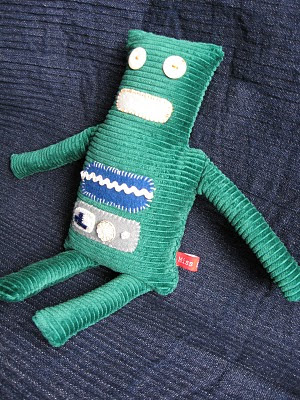 I am particularly fond of corduroy for robots. It adds an extra goofy factor that I find very amusing. I also really like the mother of pearl eyes, because they glint stealthily in the moonlight. This robot will be added to allll the other robots, who are pushing Barbie out of the doll's bed.
Have a lovely weekend every one. Robot on.

Posted by Miss Smith at 2:12 PM 9 comments: Links to this post

Guava jelly, and a haiku

Good morning,
Today I bring you a haiku that I wrote about making guava jelly from cherry guavas, from my friend's garden. I wrote a haiku because today I am a little bored, and I am avoiding doing paid work and housework. Would you like to meet those cherry guavas? Here they are. Hi guys! 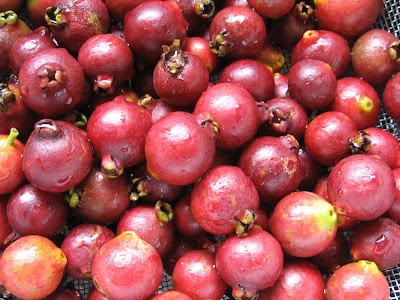 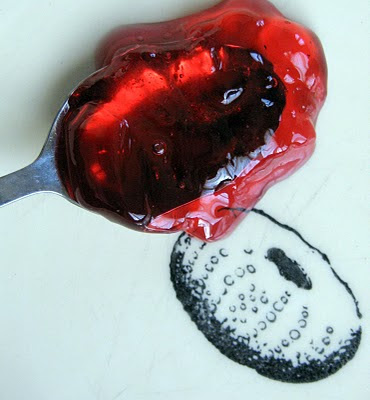 Here's how to make guava jelly. Barely cover fruit with water and simmer until soft, about 30 min. Cool, strain through a sieve (don't squeeze it! no no no! don't make it cloudy for heaven's sakes!) and measure the liquid. Add an equal volume of sugar, the juice of 1 lemon, and boil until you reach a set (to test for the set, I keep a stack of saucers in the freezer, then test a spoonful on the saucer every couple of minutes after about 10 minutes boiling. It's set when the surface wrinkles as you push your finger through it). If you are so inclined, write a small poem about it, and post it on your blog where people can freely laugh at how silly you are.

Email ThisBlogThis!Share to TwitterShare to FacebookShare to Pinterest
Labels: cooking

I had a special mission for these school holidays, something I'd been wanting to do for the longest time - to make some rewena paraoa, also known as Maori bread, using this recipe from one of my old community cookbooks. 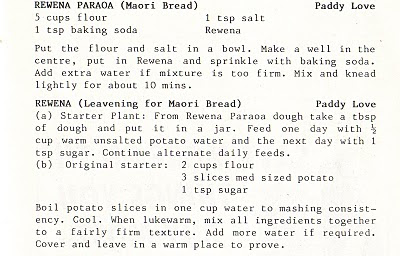 Rewena paraoa is made from fermented potatoes and wheat flour and not too much else. Once I had seen the recipe in that old cookbook I started seeing recipes for it everywhere, including a very detailed one here (to save me writing out instructions myself). I don't know why wild yeasts interest me so much, but somehow it seems like a good thing to let the yeast do the work on the flour in its own good time, without flour treatment agents and all the other bits and bobs that go into commercial (bread maker) yeast.
Well, I stirred up my flour and mashed potatoes and let it all happen in a nice warm place (in a chillybin with some warm water in it, because everywhere else is too cold at the moment). The starter got nice and foamy and smelled all sour and delicious, but it took its own sweet time about it (5 days if you please! Sheesh!). 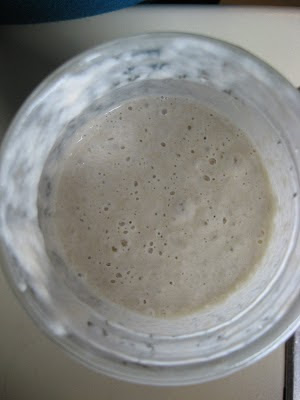 And then I took it all over with me on holiday to my favourite little seaside town, Collingwood, and made it into a nice big yummy loaf of bread, which we ate with bacon and butter while we sat in the winter sun, gazing out at the tide and the clouds. 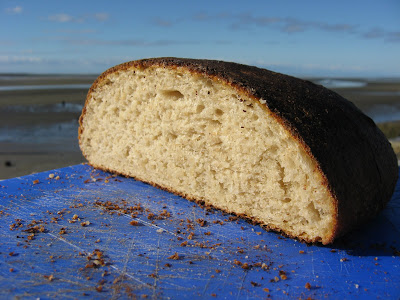 This was a fun project, and yummy too. I thought it might sneak in as a microbiological science experiment for the wee ones, but they were totally uninterested so I will drop the pretense of it having any educational value. Lets call it what it is: Microbiology for gluttons.
*Sigh* I love the holidays. Have you been doing anything interesting in the last coupla weeks?

Posted by Miss Smith at 5:07 PM 7 comments: Links to this post

Email ThisBlogThis!Share to TwitterShare to FacebookShare to Pinterest
Labels: baking

Readers, you may or may not know about the funny relationship that exists between New Zealanders and Australians. New Zealand has a weird sort of younger sibling-type rivalry with Australia. We are really sore losers when they beat us at sport, and we are even worse gloaters when we win. We mock their accent in our clipped voweled voices, and we go there for holidays and then complain about how hot it is.
Like a true younger-older sibling relationship, the older sibling has no idea that this rivalry exists. Australian friends I've made throughout my life are genuinely bewildered by it all. So Australian friends, I love you dearly but I can't help my NZ urge to antagonise you just a little bit when I make presents for you. That's just the way it is. 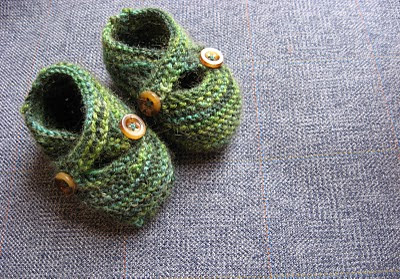 My Australian friends Julia and Martin just had a little baby girl, and I couldn't stop myself knitting some Saartje booties out of wool that included possum fibre. Yes, I am delighted to inform you that these ittiest bittiest booties have one of Australia's native animals, plucked, cleaned, dyed, and knitted into them, alongside some merino fibre, some alpaca, and some nylon for strength.

These are probably one of my favourite baby presents to make ever. You can whip them up in a couple of nights watching telly, and they take hardly any wool. Why, I can probably antagonize another 4 or 5 sets of Australian parents with the wool I have left in one 50 g ball.

Email ThisBlogThis!Share to TwitterShare to FacebookShare to Pinterest
Labels: knitting

My favourite thing about having a blog is that it's a fun way to be in touch with the world, but my second favourite thing about blogging is that I'm always learning new things. For example, when I made Scott's Farewell Slice from Ladies, A Plate, just the other day, I thought to myself that I must find out more about poor Captain Scott and his ill-fated mission, just to put this slice in context. 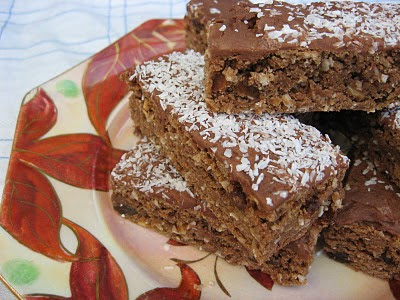 Captain Scott was in a race with a Norwegian explorer, Roald Amundsen, to reach the South Pole. England whipped itself into a frenzy of excitement and financed the mission, and a party of 65 men set off aboard the ship Terra Nova in 1910, well provisioned and enthusiastic. They sailed from England to New Zealand, and left Dunedin (my home town, incidentally) for the pole on 29 November 1910. They were farewelled by thousands of people who had been given a half-day off work for the occasion. Five men from that mission reached the North Pole, but only a month after Amundsen, and were disappointed but not entirely surprised. On the way back one of the men died when he fell down a glacier. Next, Captain Oates, who felt he was slowing the party down as a result of his frostbite, walked out into the snow never to return. As he left, he said "I am just going outside and may be some time."
The three remaining men made it to within 11 miles of safety, but died when they were caught in a storm. Realizing that they would not make it home, they wrote some notes and letters, which are rather moving reading. Here is one of Captain Scott's:
"... I do not regret this journey, which has shown that Englishmen can endure hardships, help one another, and meet death with as great a fortitude as ever in the past. We took risks, we knew we took them; things have come out against us, and therefore we have no cause for complaint, but bow to the will of providence, determined still to do our best to the last ... Had we lived, I should have had a tale to tell of the hardihood, endurance, and courage of my companions which would have stirred the heart of every Englishman. These rough notes and our dead bodies must tell the tale, but surely, surely, a great rich country like ours will see that those who are dependent on us are properly provided for."
The final letter to his wife, which he begins "To my widow" is described in some detail here, and it is one of the sweetest love letters I've ever seen.
Also sweet, of course, is the slice. It's a chocolatey kind of slice, with lots of other delicicous things in it too. Here is the recipe:

Cream butter and sugar, then add egg and combine well. Sift in the dry ingredients and add the weetbix. Mix to combine, then add the fruit and nuts. Tip into a sponge roll tin, press flat, and bake for 15-20 min at 190 degrees celsius. Cool, ice with chocolate or chocolate icing (1 c icing sugar, 2 T cocoa, 1 T melted butter, and hot water to mix) and sprinkle with coconut.