Hello viewers, how are y'all today? Sometimes time just flies by and before I know it it's two whole weeks since I last updated. Sheesh! Anyway, last time I was debating whether to decorate the little red shoes I made, and I must say thanks for all those great suggestions and comments. In the end, I decided that a fusion between decoration and practicality was in order. I love those little shoes, heavens to Murgatroyd I do, but I suspected that they would fall off in a trice and leave Mother and Baby both cursing in their own favourite fashion. Hence, I added some elastic with a button either side to hold it in place. 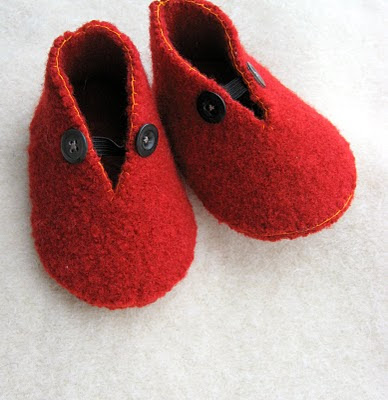 Those little red shoes may have been itty and bitty, but I have since made some that are much ittier and bittier. That's because my friend just had a lovely, itty, bitty, tiny girl named Nola, and tiny girls named Nola need tiny crossover booties made from flecked sock wool. That's a fact. 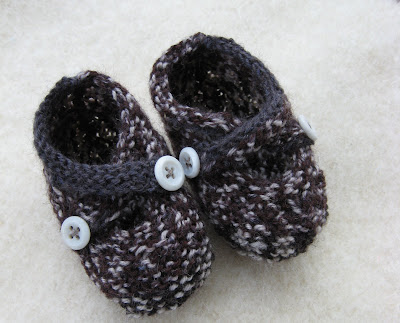 These were knitted from the free Saartje's booties pattern, here, found via ravelry. Super quick, super cute. Super way of using up the leftover sock wool, too.
By the way, who out there is fond of a little schadenfruede every now and then? If you want to see possibly some of the meanest ever comments about a craft item, have a look at the comments here. My favourite one was the person who said that it looked like a pile of clown vomit. Aiyeee~!
Posted by Miss Smith at 11:43 AM 7 comments: Links to this post 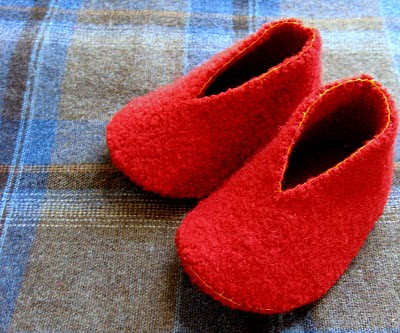 I've been wanting to make these bitty booties by Heather Bailey for the longest time, and goodness knows I've had plenty of good reasons to what with all the wee babies my friends keep having. (I'm sorry friends, I am dreadfully tardy when it comes to making and sending new-baby-presents). Anyway, this weekend, being so wet and wintry and all, it was the perfect time to give them a whirl. Easy as can be, I have to say. Two pieces per bootie, blanket stitch on the edges, and bob's your uncle. I used some felt that I made by felting a woollen jersey in the washing machine. For this, I buy jerseys at junk shops that are 100% wool, and I make sure the washing instructions say handwash only. That's a sure sign it will felt up a treat. Then, I put it in the washing machine on the 60 degree (celsius) cycle, with plain old washing powder. Like magic, you get an incredibly thick felty fabric that you can use for toys or slippers or fabric boxes or little purses or anything that takes your fancy.
The pattern has some decoration ideas, and they look pretty nice in the photos. However, I am a little conflicted about the decoration aspect. Do I add something or not? I'm a little hesitant because...well...it can all just turn into clown clothing before you know it. You know what I mean? Craft treads that line between cool, tragic, and comic, and it's so easy to lose your way.

Now I don't know what the weather's like where you are, but here in Nelson, New Zealand it feels like we haven't seen the sun for weeks. It's been grey skies and lots and lots of rain. Winter has truly arrived.
I know that winter calls for dark colours; grey, brown, blue, black. However, sometimes I want a little pick-me-up, a bright something that leaps out from all the navy and black. I had just the thing in my stash. Not my usual fabric choice in that it's 100% polyester, but I just couldn't resist the bright colour, the apple blossom broccade pattern in gold and white, and the price ($1 per metre in the Spotlight clearance sale last year).
I had bought this fabric thinking I'd make some kind of crazy, over-the-top princess dress for Sylvie, but when I spotted it there in my stash a couple of weeks ago, I thought "I'm gonna make something for Myself".
So, I made something for Myself. It's New Look 6921, if you're interested. If you read my sister's blog you'll know that she's a rocket-scientist type of sewer. When I was talking about this top I told her I was going to leave out the interfacing and topstitch to hold the edges in place instead of understitch. She said something that sounded like this "Blah blah blah de blah blah layer the seams blah blah blah understitch as far as possible blah blah blah sit properly blah de blah blah just use light interfacing blah blah blah." Meanwhile, I thought about what to cook for dinner that night. 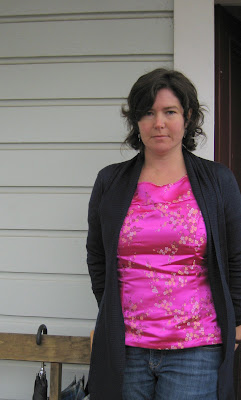 So I made the top, completely ignoring all her good advice, Now that it's finished I can see it would have been better if I'd used light interfacing, and understitched instead of topstitched, but you know what? I like it anyway. It's so bright and cheerful. 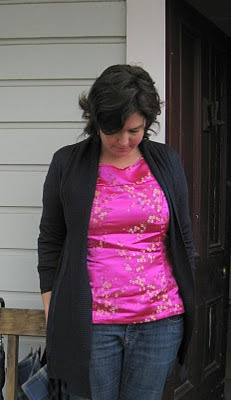 You know, I'm just getting back into clothes sewing after a very long absence. I just couldn't face big projects when the wee ones were very small. I think I really like this new phase we're in, where I have enough head space to sew a top, and to appreciate it even though I know it's not perfect.