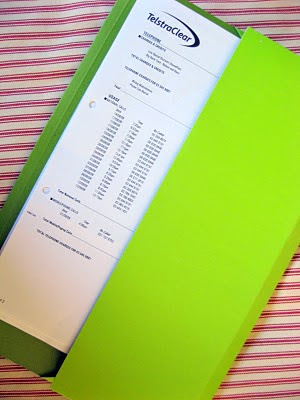 This year, though, I had strange office-craft fusion thought pop into my head. What if I was to craft a folder? An A4 sized sleeve to hold all of my bank statements and receipts. Would that be crazy or cool? I made one, just to guage how it felt to combine office consumables with crafting. 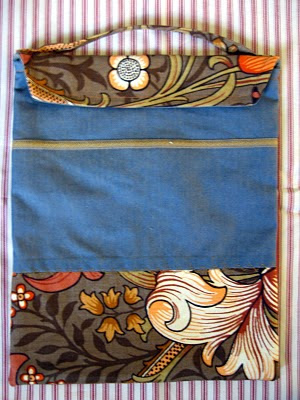 Now that I've made it, I'm still undecided. I can't decide if it's silly or useful. I can't even decide if I like the fabric. I think that the rudimetary accounting that I have to do each year is scrambling my brain. Next project: A knitted calculator that runs off a lemon battery. I'm sure it's possible.

Now, who among you will confess that in the privacy of your own kitchen, out of earshot of small people, you refer to beetroot as "beet me root me"? Anyone?
Really? Is it just me?
Well, if you don't you should, because it gives you a great lead in for funny one-liners while you cook dinner.
Me: "Would you like some beet me root me with your dinner darling?"
Him: "Oh yes, I always want that"
That sort of thing.
Now that we've got the smutty intro out of the way, I would like to inform you all that this year I grew spectacular beetroot. Yes, in my garden. It was as big a surprise to me as to anyone else, because many things in my garden die of neglect or just sit there, sulking. I forgot to take a photo of it freshly harvested to impress you all so here is a photo of my purple dwarf beans instead. 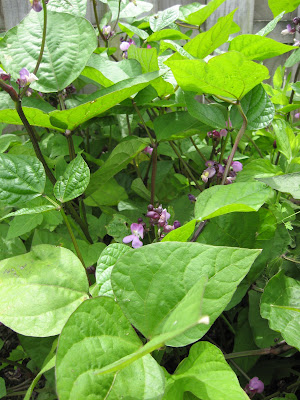 Okay, back to the beet(me)root(me). I bottled them for later, because I have taken a great shine to beetroot salads, like this one, or this one. I based my recipe for bottle beetroot on this one, but mine has enough changes that it warrants me writing it out in full, I think.
Bottled beetroot
About 1 kg beetroot, washed but unpeeled
Water
3/4 c white wine vinegar
1/4 c balsamic vinegar
1/4 c sugar (or more if you like your beetroot sweeter)
2 t salt
a few grinds of black pepper
Spices: 1 T coriander seeds, 1 t black mustard seeds, 1 t cumin seeds. Dry roast in a hot pan, then crush a little in a mortar and pestle
Cover the beetroot with water and simmer until tender. Rub off the skins, they should come off quite easily. Slice, halve, or quarter the beetroot into whatever size you prefer. Return to the pot with 1 C of the cooking water, the vinegars, salt, sugar, pepper, and roasted and crushed spices. Simmer for another 10 min then ladle into hot jars, top the jars up to the very top with the cooking liquid, and seal. 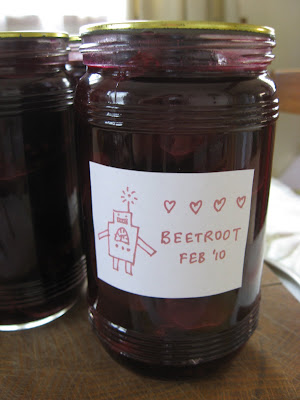 Ideally, you should use jars that you just got at a garage sale so that your husband can see that they are extremely useful after all.

Posted by Miss Smith at 1:40 PM 9 comments: Links to this post

Email ThisBlogThis!Share to TwitterShare to FacebookShare to Pinterest
Labels: cooking

I'm fairly domestic, I admit that. I can knit, sew, crochet, take up hems, and sew clothes and silly fabric robots. I am a good cook and my baking's not bad and I can do all the Granny stuff like making jam and sauce and preserving fruit.
But...I am a crap housewife. I often let the house get disgracefully messy (When I had a desk job, my colleague used to sigh as she looked at my chaotic desk, and say "Does the inside of your brain look like that?"). Yeah? So what?
Simon, who is a very tidy person, does his best to live peaceably with such a messy person. I promised him that I would contain my fabric collection in two suitcases only. I never promised the suitcases would be closed. 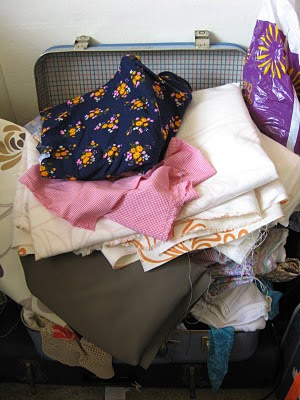 The bookcase in the dining room was to prevent every flat surface from filling up with paint and making-things and DVDs and glasses cases and pencils and keys. It was a good idea, but it's not working. 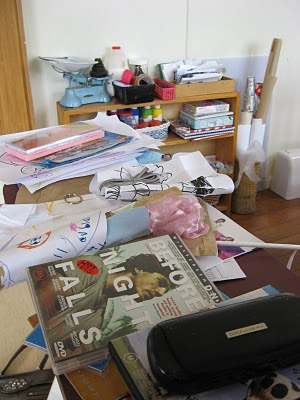 And don't even get me started about the wars we have over jars. I save them, hiding them in out-of-the-way places until I need them for jam or whatever. Simon finds them and sneakily recycles them because he thinks I won't use them. But this weekend, I happened across 5 dozen jars at a garage sale for only $5!

The phrase Simon came out with rhymed with "Duck's cake!" and it had a swear word in it. Oddly enough, he accidentally hit himself with the electric fly swat soon afterwards, which I do believe might be the jar gods telling him what they think of his attitude. 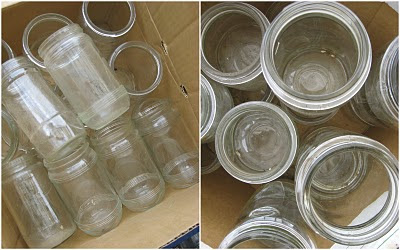 He'll be SO happy when I've filled them with apricots and greengages and apple and jam. I just know it.

And since I haven't been making any craft items over the last week, you might be interested to know what we do with too many zucchinis. I grate them up and put them in pizza dough. I use 2 c plain white flour, 1/2 c rolled oats, 2 t sugar, 1 t yeast, 1 t salt, 1 T olive oil, a grated zucchini and enough water to make the dough the right soft-but-springy consistency (about 2/3 c). I leave it to rise, roll it out, put pizza toppings on top, cook it, and we eat it all up, even the small zucchini hater that lives in this house.

What do you do with too many zucchinis?

Email ThisBlogThis!Share to TwitterShare to FacebookShare to Pinterest
Labels: baking

Ever since I made Harry's double-headed seamonster, Sylvie has been bringing me pictures at regular intervals saying "What do you think of this one?". It look me a while to figure out that she wanted me to make a toy out of her picture, just like I did for Harry. Out of maybe a dozen pictures that were presented to me in this context, we chose this one to make up: When I use the kids' artwork for things like this, I really try and preserve their vision. Part of me, the uptight adult part, wants to make the shape symmetrical, the arms the same size, the legs a little longer. But if I did all those things, it wouldn't be Sylvie's design, and that's just not the deal. So together we choose some fabric, and we make it up. Here she is, she is called "Balice": 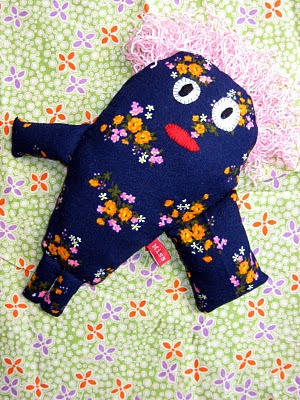 Balice really makes me laugh. You can tell she has a rip-snortin sense of humour. I wish there was a little squeaker available from craft stores that made fart sounds. If such a thing existed I would definitely have put one in.

Oh dear, I think the school holidays are getting to me. Lucky it's the second-to-last day or who knows what I might write.

Posted by Miss Smith at 2:24 PM 8 comments: Links to this post